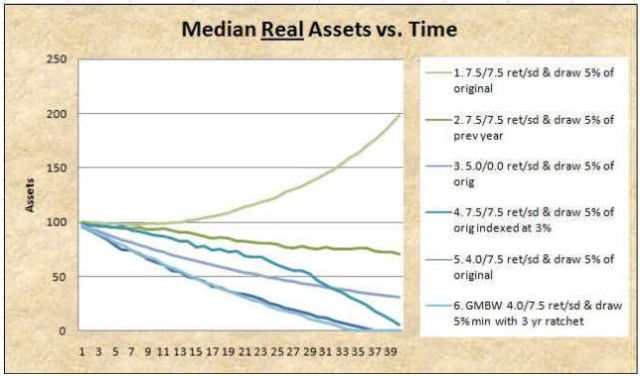 The results will clearly be dependent on the assumption of return, inflation, GMWB specifics and fees.
Using the “median” real income (draw) results in the following ranking of Scenarios: 1. #4 – draw of 5% of original investment indexed is the highest payout, but it can run out of assets relatively quickly and then income stops! 2. #2 – draw of 5% of previous year-end diversified portfolio value 3. #6 – GMWB – note the significantly lower income stream than Scenario #2 above 4. #1 and #3 (and #5, but it too runs out of money)
Some observations, from the income perspective, are: -from an income perspective Scenarios of rank 2 and 3 are essentially identical. -Note that the real income resulting from U.S. annuities, start out much higher level than those offered by the other scenarios, but the annuities have zero residual value irrespective of when investor dies. Also, even in the most advantageous case, that of a male annuitant, the higher payout is eroded fairly quickly by inflation and ends up only 25% higher than the GMWB scenario. -the GMWB, Scenario #6, results in median income stream of only very slightly higher than that from the 5% five-year GIC , Scenario #3, yet the latter always has a (higher) median residual value. -Scenario #5 (with same after-fee returns and standard deviation as GMWB, but with a fixed draw of 5% of original investment) was included to see how much income benefit results from the 3 year ratchet feature of the GMWB. The participation benefit of the 3 year ratchet appears minimal. -GMWB income stream is significantly eroded by inflation over time
Now using the “median” residual real assets results in the following ranking of Scenarios: 1. #1 – draw of 5% of original investment from diversified portfolio, but income stream significantly eroded over time by inflation (though the resulting residual asset growth is significant) 2. #2 draw of 5% of previous year-end diversified portfolio value 3. #3 – 5% 5-year GIC/CD- this has the lowest income stream- AND #4 – a draw of an indexed 5% of original investment, but runs out of money relatively quickly 4. #6 – GMWB, has lowest residual value
So Scenario #2, a draw of 5% of previous year-end diversified portfolio value, is the best compromise solution between income and residual value. It also never runs out of money (by definition, at least using the assumed bell-curve/Gaussian distribution) and gives one some level of protection against income erosion due to inflation. (This is because on the average offsetting the 7.5% return, there is the 5% inflation and 3% draw resulting in expected 0.5% real asset erosion per year; though this is partly offset by the effective reduction of the draw when previous year’s returns were substandard). Now, one does get some protection from dramatic drop of the equity portion of the portfolio around retirement, though the subsequent lower median draw compared to other scenarios discussed may be too high a price of protection for many investors. For example, if one would do 60% equity and 40% fixed income mix, it would not be unreasonable to expect to achieve the long-term 7.5% annual return with 7.5% standard deviation, assumed for the diversified portfolio. Implementation could be fixed income investments in the tax-sheltered portion of the portfolio and equity in the taxable portion, with annual rebalancing to maintain the mix. (Specific selection of ETFs has been discussed in the Portfolio Management  section of this website ). U.S. residents’ implementation may be the same as that of indicated for Canadians. Alternately it may be as simple as using Vanguard’s new Managed Payout Fund(s), though that may result in some loss of tax efficiency, as it is not easy to place fixed income in the tax-sheltered part of the portfolio.
This GMWB blog is a work in progress, though since the initial results are somewhat startling, I decided to share them, while I plan to extend the evaluation/comparison in accuracy (e.g. larger sample size) and scope (e.g. other comparatives, such as annuities, longevity-insurance/delayed-payout annuities, other return characteristics, and other success criteria).