-There are at least three options that you can choose from: (1) a comprehensive policy for about $4,000 (age<65 when provincial drug coverage kicks in typically) that covers some of the dental, drugs, hospitalization (semi-private differential) and extended health nursing, vision, hearing, ambulance, etc), (2) a basic policy for about $700-1100 that excludes drugs and dental benefits but covers hospitalization (semi-private increment) and extended health, and (3) self-insure

-Before you decide which of these three options is right for you, you should understand what your last couple of years’ worth of expenses in all these categories, estimate how much of the expenses would actually have been reimbursed under to policies that you are considering; you should also estimate what the expenses and corresponding reimbursement might be in a “worst case scenario” situation and how you might cope in such a situation if you self-insured

-Given: (1) Canada’s “universal’ health care system and some level of drug coverage for seniors, and (2) the load factor of individual health insurance policies, self-insurance may be a viable option for at least some Canadian retirees (self insurance is notan option for Canadian visitors to the U.S.). The decision to buy insurance or self-insure is at least partly based on a combination affordability, perceived value, and risk tolerance (i.e. willingness and ability to bear the risk) of each individual.

-Coverage is often available without a medical questionnaire if one applies within 30-60 days of leaving a group policy; some may find this attractive

-None of this should be considered as personal advice, rather only as some considerations when making your decision on health insurance

-this look at alternatives was triggered by the coming loss of health insurance benefit for ex-Nortel health care beneficiaries (e.g.  pensioners), but may be useful for other Canadian readers who are exploring individual/family health insurance coverag

-could Canadians self-insure rather than purchase a policy?  Probably many could, when you consider what the insurance actually covers in the worst case scenario or when you consider the alternative (perhaps not being able to pay for, and therefore the option to insist on semi-private accommodations); all except the wealthiest of Americans cannot, just as Canadians going south to the U.S. for a day or the entire winter cannot, since losses/costs can be catastrophic

-given Canadian healthcare system does it make sense to self insure, especially since provinces (Ontario, Quebec, etc) offer drug benefits to those aged over 65

-can pensioners afford $4000/yr to buy health insurance? (It is a great benefit when it is provided by your employer, but many pensioners may not be able to afford that cost)

-note the generally low maximum /caps/limits for drugs, dental, vision/hearing; so in effect you are pre-paying many of those routine/recurring costs plus the not insignificant administrative expenses incurred by health insurance companies and of course you must pay for the profits that insurance company would like to make (i.e. the implicit ‘load factors’ which measure the drag on each dollar of insurance premium compared to benefits paid)

-load factors in the U.S. (and I’d be surprised that it is lower in Canada) for non-group health insurance=25-40%

-is there a formula and a source for a lower cost health insurance which may be more attractive (covering catastrophic rather than routine/recurring expenses): e.g. hospitalization (100+ days or unlimited), dental (not routine/preventive, only major and restorative), drugs (with deductible), no vision and hearing (as they have such low caps); this would reduce insurance company admin cost dramatically and perhaps by including $1000 (hospital, dental and drug) deductible it could be priced under $1200/couple in early 60s?

-insurance policies have various mechanisms to limit payouts with caps/maximums, deductibles, co-payments, official fee-schedules, generic vs. name-brand drugs, coverage of only certain drugs on a list an excluding all others, etc, so often you are not sure what you bought until after a number of years of being in the plan; many of these increase administrative costs and in fact reduce the protection against most expensive though low-probability exposures

-my effective reimbursement rates in the past two years (in a better plan than what an individual can typically purchase) for: drugs were about 65-70% of my expenses, for dental about 12% (due to major restorative expenses which were not reimbursed under my current insurance and would be minimally reimbursed even under the most generous of these plans); my overall annual reimbursement rate for past two years was about $1250 of claims averaging $5,000; is this coverage worth $4000-5000/year?

-policies are available where typically medical questionnaires need to be completed, though there are also policies (e.g. Sun Life and Great West Life) which allow insurability (at a higher price or similar price but lower benefits) without medical questionnaire (underwriting process)  if one joins within 30-60 days of leaving a group plan

Without reading all the fine print, I had a quick look at what I might consider buying for myself and my wife in the early 60s and essentially in good health and here are a couple of tables summarizing what I found by looking at Sun Life (SL), Great West Life (GWL), CARP (ManuLife), and Blue Cross (BC). These companies and policies are only examples and are not meant to be recommendations.

**Note: Cost is based on essentially healthy couple aged 62-63 (Prices drop at age 65 due to Ontario drug coverage 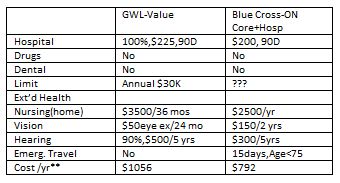 -Nortel pensioners don’t know if and what Sun Life will offer to ex-Nortel health insurance beneficiaries who are about to lose their coverage; Sun Life knows exactly what the individual/group’s experience has been, but of course they don’t know who would buy the insurance if they offered an attractive group policy (they often run the risk that those with highest expenses opt in and those with lowest go elsewhere or self insure)

-Additional value is derived possibly from smaller items like Emergency Travel (e.g. 60 days at Sun Life might be worth an additional $300-500 for those who might need that much coverage) when included

-with mostly  low caps on maximum benefits payable on drug and especially dental benefits, you might wonder if you are just pre-paying recurring expenses with a large ‘load factor’ tacked on top of those expenses

-Major expenses coverage, should they be required, are items such as: Hospital (semi-private upgrade assuming that you’d actually have to pay for this, as opposed to it being the high probability default provided), Drugs ($5-10K/yr assuming that the unusual expensive/new/experimental drugs that you might need are actually covered by the plan)

Bottom Line(from the selection in this table):

-summary of “high-end”/comprehensive and “low-end”/basic plans are given in Tables 1 and 2 above.

– at the two extremes, self-insurance might be more attractive for people who have relatively more assets to absorb the most extreme covered events by the policy (not necessarily the actualworst case events), while a comprehensive insurance policy might be more attractive for those with little assets but a more steady income sufficient to cover the annual cost of the insurance

-“high-end” plan might be a race between Blue Cross ($4000) and CARP ($4500) and depending on whether you favor higher maximum on Hospital (CARP) or Drugs (Blue Cross). (Keep in mind that when you reach 65 a provincial drug coverage program might kick in.)

-‘low-end’ plan: something like Blue Cross’s ‘Core + Hospital’ for about $800 (including 15 day emergency travel health insurance, unlimited number of trips); you’ll still have $3500 left to put in your personal health care savings fund each year from which you get to pay for your expenses.

-for individuals with high recurring expenses who might be able to qualify under the 30-60 day clause applicable to those who just left a group, they might find that the economics make a little more sense

-of course companies likely have the option to raise rates and modify coverage as time goes on; if so they some may be tempted to lowball initial offering

-you might want to start by looking at the claims and reimbursement on your current plan (the ex-Nortel people at Sun Life can look at their claims history over the last two years as a good starting point for the analysis); you might then do some scenarios to see what risk reduction a particular insurance policy actually buys you, remembering that the best insurance is that which provides coverage for catastrophic events (death, long-term disability, emergency travel health, and similar items) which can wipe you or your family out financially). Looking at your personal situation and actual/theoretical scenarios can give you insight on what approach will best meet your needs. (Two situations that occurred in my family are somebody who had a policy with low caps/maximums costing about $700/year for 30 years and only benefited once about the equivalent of one annual premium. Another situation was when someone had a terminal illness where the state of the art treatment in the U.S. was not yet the accepted protocol in Canada; the monthlydrug cost was $4000! Even if the insurance company would have covered this drug under the policy, given the annual $1200-10,000 maximum drug coverage under the ‘high-end’ $4,000 a year cost policies looked at in the above tables, the protection would have been a very small percent of the $48,000 annual cost of the treatment.)