-it is expensive; load factors of 40-45% are typical (i.e. for each dollar of premium only $0.55-60 benefits are paid, and for the example considered an actuarially fair premium would be about 53% of the charged premium)

-benefits are not related to cost of dealing with CI event; unlike losses associated with life, health (esp in the U.S.), home, disability and liability insurance, the CI associated financial losses would tend to be less catastrophic and already covered by good life, health and disability policies

-if you already own a policy for about ten years, the policy continues to age 100 and premiums are fixed, you might want to investigate if it might make sense to keep it (if sunk costs are disregarded)

-policies are complex and not standardized; triggers, inclusions/exclusions are difficult to understand (though probably less so than in the case of LTCI)

(P.S. Thanks to EF and JL for suggesting the CI topic for a blog.)

Critical illness (CI) insurance pays a specified amount (typically $25K, $50K, $75K or $100K) in case one is diagnosed with a life threatening (so not all cancer necessarily qualifies) critical illness (cancer, heart attack, stroke, and other explicitly specified conditions). This is usually cheapest when one is young and typically is not available past age 65. Not every policy has the same list of CIs upon which a payout is promised, and some policies require that insured live at least 30-90 days after diagnosis (“survival period) and/or have 90 day waiting period before cancer coverage takes effect after policy goes into force. The recommended amount varies but some sources suggest 1-2x salary. Apparently CI insurance is popular in Canada and UK, but less so in the US.

It covers the white space left between life insurance (i.e. you don’t get paid unless you die) and disability insurance (you may not be sufficiently disabled to receive disability benefit and/or you may have some ‘large’ expenses coincidental with CI condition or may wish to eliminate some major debts.)

According to AIG’s “Understanding critical illness insurance ” CI claim probability is much higher than death or disability as shown in the table below (note that the higher probabilities indicated for younger individuals, is because the probability covers longer period of time to age 65) 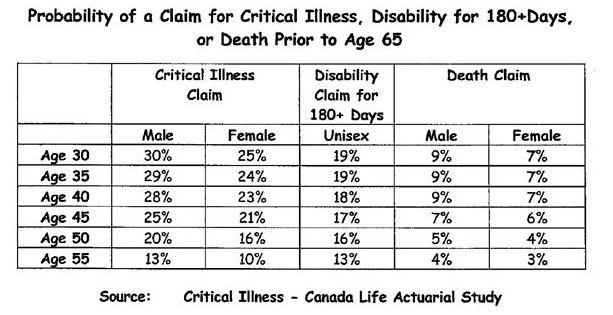 CI is applicable in individual (with or without dependents) or the business context (e.g. partner protection)

Other arguments in support of buying CI insurance are constructed around the data in the Some Statistical Data section of this blog below.

One of the main reasons not to buy is high load factors of 35-45%; these are sometimes related to specific regulatory requirements resulting in adverse selection concerns. (‘Load factor’ of 25% means that for each $1.00 of premium only $0.75 is paid out in benefits; the complementary descriptor also used by the insurance industry is ‘Loss ratio’ which is the amount of benefits, in percent, paid out for each dollar of premium.

Another reason not to buy is that CI is sold (it’s an order of magnitude easier to find articles on ‘how to sell CI’ than why this makes sense financially or otherwise) not bought (like property and casualty, health and life insurance). Sales tools often scare tactics: “the cost of living is higher than the cost of dying” or “would you rather lose your home?”(“Critical Illness Presentation”  )

Also, policy value is not related to expected costs associated with specific CI (it feels more like a lottery ticket)

Here are some quotes from “ Marketing of critical Illness insurance” material to insurance companies encouraging them to start selling CI insurance “Many clients perceive that the chances of suffering a critical illness condition are high. Whether this is correct or not is a different issue but, as such, critical illness cover addresses clients’ fears in relation to what they perceive as a high probability event. These fears are often non-specific in financial terms, although mortgage protection is a common objective. The product provides clients with peace of mind.”, and “The four great motivators are said to be greed, fear, love and obligation. To a degree, critical illness speaks to all of them.” For those interested for an in-depth look at the sophisticated sales approaches to CI insurance, this document from Munich Re, is a great read.

There is also a risk that the insurance company may not be around to pay in 10, 20 or 40 years, so check what third government guarantees may be available to secure claim.

There appears to be no standardization of:

-What CIs are included/excluded? Is list too restrictive? Some policies cover only 1-3 major CIs while other cover 20-30.

-The specific triggers to payout (‘diagnosis’) can change with evolving technology and may be challenged;

-Beware if premiums are not guaranteed

-Return of premium feature/option upon death or age 100

-Is payout a function of ‘severity’ of illness?

-Do you need both disability and CI insurance?

-Is there a medical questionnaire and/or paramedical exam requirement? Pre-existing conditions (exclusions/limitations/waiting periods from policy start)

Figure 8 in the Gutierrez and Macdonald paper “Adult polycystic kidney disease and critical illness insurance” , based on UK data from early 90s, was the source of incidence rates I used covering all critical illnesses as a function of age/gender, that I have used. There are reports of quality issues with CI incidence data and it may also be location dependent. The CI incidence data from this paper was used as the basis of the numerical calculation in the Example shown further on in this blog. Here is the original data from the referenced paper (I used this data, after clarification from Dr. Macdonald as to its correct interpretation, to generate the probabilities used in the net present value (NPV) calculations further on in this blog. Of course, ultimately, there will be CI incidence differences between countries and CIs (and other Ts & Cs) ultimately included/excluded among different policies, so the perceived quantitative conclusions are somewhat qualitative.)

Graph 2 shows that when we factor in the actual probability of both being alive and having a CI event, when you include all sunk costs at all ages (i.e. all premiums paid to date) the NPV<0 for all ages to 75 (and beyond).

Graph 4 however shows that if we discard previous sunk costs each year (i.e. disregard earlier years’ premiums paid) then it may not make sense to allow the policy to lapse after the 9th year, since the in-year premium is less that the expected in-year benefit (i.e. policy is worth keeping based on these numbers). This is because around year 9 of this policy (around age 64), when the probability of a CI event is 2.4% (and increasing each year thereafter), then the expected benefit is $2,400 (2.4% of $100,000) which is about equal to in-year premium paid ($2,440). 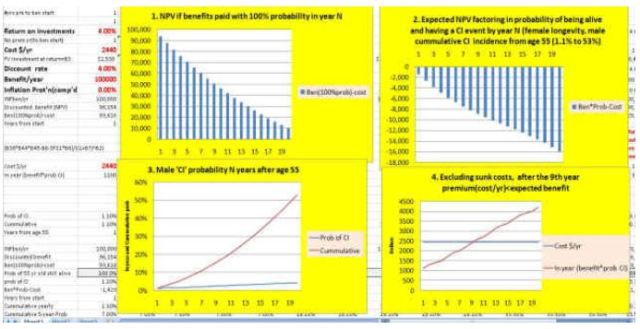 The following shows the identical example with expected return of 6% from a balanced portfolio (rather than the “risk free” rate of 4%). The outcomes are similar as in the 4% return case, though somewhat even less favorable.

The bottom line is that I am not convinced that CI insurance is a good use of my funds (NPV<0), though if you already have a CI policy for a number of years (and premiums are guaranteed) then, disregarding sunk costs, it may not make sense to cancel it. Of course if one feels that (s)he needs CI insurance for “peace of mind” or wants to place a bet (lottery) on a CI event, then it is a different consideration, so long as one realizes that it is not* an actuarially fair priced bet (because load factor is in the 40% range). Interestingly, if the annual premium was about $1,300 then the NPV would be within +/-$600 throughout the first 20 year period of this policy (i.e. it would be an actuarially fair premium).

*corrected February 5,2012 by adding the omitted word not in the last paragraph, to indicate that “it is not an actuarily fair priced bet”

← Chevreau’s “Wealthy Boomer”
Longevity Insurance- What does it buy you? →